This search form uses an instant search feature. As you type, search results will appear automatically below the search field. When you've entered you desired search terms use tab to navigate through the available results and hit enter to open the selected page or document.
EDIT LEFT

Below is a form that can be used to inform the District Coordinator about bullying and/or harassment you have witnessed or personally experienced 24 hours/7 days a week. By completing and submitting the form, the DASA Coordinator will receive notification of your report and inform the School Building Administrator.

You can complete and return to the school Attn: Mr. Thomas Cervola, Dignity Act Coordinator.

The Gilboa-Conesville Central School District is committed to the education of all children. It is our mission and responsibility to accept ALL students at their present levels and help them move forward academically, socially, emotionally and personally. To that end, the district provides a variety of and accommodations to assist all children. 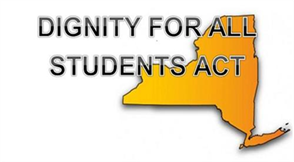 The Dignity for All Students Act

New York State’s Dignity for All Students Act (The Dignity Act) seeks to provide the State’s public elementary and secondary school students with a safe and supportive environment free from discrimination, intimidation, taunting, harassment, and bullying on school property, a school bus and/or at a school function.

The Dignity Act was signed into law on September 13, 2010 and took effect on July 1, 2012. Amendments to the act are effective as of July 1, 2013. The original legislation amended State Education Law by creating a new Article 2 – Dignity for All Students. The Dignity Act also amended Section 801-a of New York State Education Law regarding instruction in civility, citizenship, and character education by expanding the concepts of tolerance, respect for others and dignity to include: an awareness and sensitivity in the relations of people, including but not limited to, different races, weights, national origins, ethnic groups, religions, religious practices, mental or physical abilities, sexual orientations, gender identity, and sexes. The Dignity Act further amended Section 2801 of the Education Law by requiring Boards of Education to include language addressing The Dignity Act in their codes of conduct. Additionally, under the Dignity Act, schools will be responsible for collecting and reporting data regarding material incidents of discrimination and harassment.